The Most Accurate Pie Chart for Job Seekers 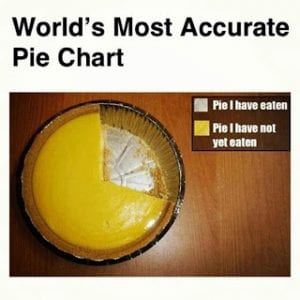 Once upon a time, an out of work job seeker was starting to develop a case of self-doubt wondering if he would ever get a job. After weeks of searching, spending a great deal of time and effort filling out applications, sending in specific information and waiting, he determined his experience was not what employers wanted.

From there, he began to reason that he might need to lower his sights and look for positions below his skill level and compensation just so he could get a job. He was so frustrated – just about ready to settle for anything – that he tried something new: He laid out his activities in a pie chart.
Within minutes of thinking about where he spent his time and energy, it became clear he was putting most his effort in areas that produced the least results. He was spending 75 percent of his time answering ads, diligently applying everywhere there was a position. The other 25 percent of his time was spent on the No. 1 way to find a job – Networking.

This is a common scenario. So many job seekers work very hard but spend an enormous amount of time in the least-productive job-search areas. Once they see the connection between their job-search efforts and the effectiveness of those efforts, they’re relieved to discover it’s not about their skills or backgrounds, it’s about their job-search activities.

So what is the moral of this story?

1. Never – EVER settle for anything less than what you deserve.

2. Increase the size of your network (Pie) and your chance (Slice) of career success improves with it!

This site uses Akismet to reduce spam. Learn how your comment data is processed.

Related Posts
How much is a billion? By Harvey McKay
Call on a Hire Power
TIPS FOR JOB SEEKERS OVER 50+